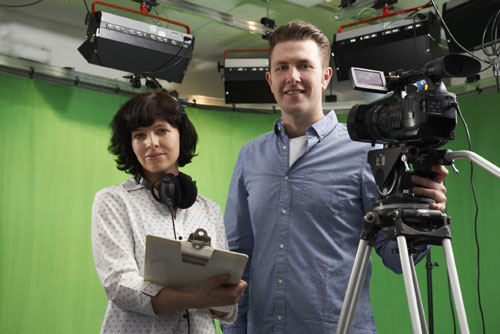 If you consider yourself creative, like to work with people, and have a love of film or television, a career as a producer or a director may be right for you.

Both producers and directors create movies, television shows, plays, commercials and other performing and visual art productions. They work closely with actors, writers, and set designers to achieve the agreed upon idea of what the show should be.

Producers and directors have a similar job, but with a few distinct differences. Where a director is more in charge of the creative direction of the project, a producer is mainly in charge of the financial and logistical aspects. Both of these careers work closely together to ensure that a film or show gets made.

Time management is a valued skill for producers/directors, as many of the people they are working with count on them to keep the production schedule moving smoothly. Being able to handle stress and high pressure situations is a must if you want to become a producer or a director. Directors often work closer with the creative staff on set, whereas producers work more in the production office to ensure that the film is being made on time and within the budget.

Further details on a career as a producer and director are listed below (statistics from the May 2015 Bureau of Labor Statistics and Onet Online):

is the average yearly salary for producers and directors.

have a Bachelor’s degree while 15% have a Professional degree.

Most producers and directors have a bachelor’s degree in a field related to entertainment or finance, but it is usually not required. Having several years of experience in acting, entertainment, cinematography, or editing is very helpful and can help you be successful in getting a career in producing or directing.

A producer’s daily schedule can include raising money for the film’s budget, handling marketing of the project, working with the director, overseeing editing, and overseeing the technical staff that works on the film. Directors work more closely in the creative aspect such as hiring and working closely with actors, working with the writer, planning the visuals of the film, and working with producer to stay on budget.

The average yearly salary for producers and directors as of 2015 is about $68,400. People just beginning in this career area can expect to earn $32,000 while more seasoned directors and producers can receive upwards of $180,000 a year.

The expected growth for 2014-2024 for producers and directors is about 9%, faster than most industries. There is predicted to be a continued need for new films and shows both domestically and worldwide and with the increased affordability of media distribution, directors and producers can enjoy access to a wider audience.