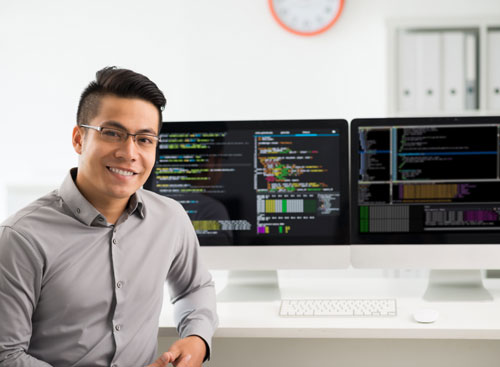 The term software developer encompasses a very large spectrum of occupations that are each unique, but fall under the umbrella term of developer as it utilizes computer programming knowledge to develop a product. For example, the various things that a software developer can do ranges from working to create optimum software solutions to analyzing a client or users needs and walking through a process that involves designing, testing, and creation to make software that meets the needs specified.

The work environment, like the work itself, is varied. Generally, however, a software developer can be guaranteed to do collaborative work with other developers and other people of the team. In addition, while some developers work remotely and others work in traditional office settings, it is common for the hours required to be more extensive than other forms of work.

Further details on a career as a software developer are listed below (statistics from the May 2015 Bureau of Labor Statistics and Onet Online):

is the average yearly pay for software developers.

have a Bachelor’s degree while 17% have a Master’s degree.

The typical entry employee in a software development role will require at least a bachelors in a relevant field, such as computer science or software engineering. There is no external exam required to enter in as a junior developer, however, work experience, such as through an internship is suggested.

Software developers can have a wide range of duties, such as designing models or diagrams that specify how a specific program will interact. In addition, developers regularly perform software maintenance to ensure that their project is working correctly. Programming is not synonymous with the duties required of a developer, but often times it is either directly or indirectly linked to their work.

The salary for software developers is usually considered one of the highest paying occupations. The median salary is 100,000/year, with the lowest 10% being paid roughly 58,000/year and the highest 150,000/year (according to May 2015 BLS.gov statistics).

Software developer careers in general are expected to rise in demand over the next decade at a growth rate of 17%. This is much higher than the average for comparable jobs. This growth is a result of the continuing dependence on applications created by developers.

Some College, No Degree